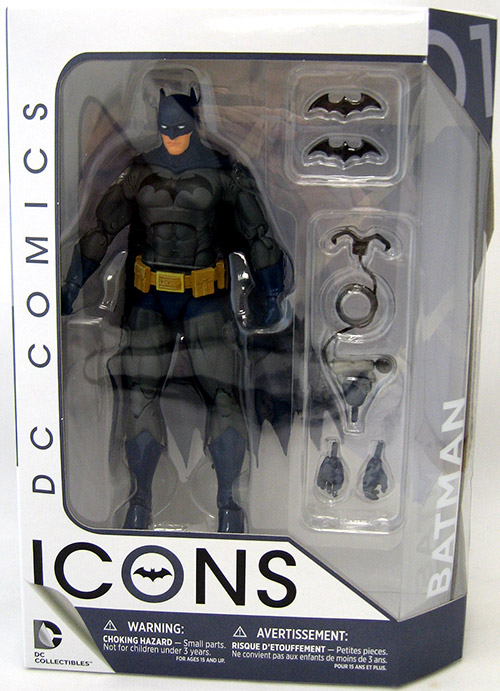 DC Collectibles and its forebear DC Direct have been an emotional roller coaster for me. High quality sculpts have always been the norm for them, but sadly, articulation has always been more of an afterthought to them. Some figures would be particularly gifted, others incredibly minimal while others still would have articulation that was, for lack of a better term, completely confounding. Another frustrating thing, their scale was always 7 inch…which meant that your DC stuff NEVER fit in with your Mattel DC figures…grrr… In recent years, a new problem crept into their products, plastic quality. Many figures were made of a brittle transparent plastic that was painted over, resulting in a figure that would disintegrate if you so much as looked at it crossways, much less actually touched the damn thing. So, when earlier this year DC Collectibles announced their new 6 inch line, DC Comics Icons, well, the pictures looked good…but presentation was never the problem. There’d be no telling the quality of the line until they were in hand.

That day has come, and as you can tell from my opening…it looks like they got it right.

Now, you’ve read the title and, if you’ve read this site for any amount of time, you know that I suffer from a unique condition known as Bat-Fatigue [There’s only been one other documented case in the world, some three plus years ago, seen here. – Ed.]. So, why the hell did I buy yet another Bat figure when I’d love to just send ‘em to the great big plastic heap in the sky? Well, I’ll admit, given some of the issues around DC Collectibles’ products lately, if Batman here did disintegrate in my hands, well, I wouldn’t be happy about the wasted $25, but there would be a certain joy to it and while it’d be an expensive smile, it’d be a smile nonetheless.

But HEY! Fortunately, that’s not the case!

Starting with articulation, this is certainly in the running for the most articulated figure to come out of DCC…at least to my knowledge (and given how Earth-2 Superman turned out, there has been a passage of time since I’ve checked them out…). Batman’s head is probably on a ball joint, because he can look side to side and down, but not up. [Since when did Captain Bring-down ever have to look up, though? He’s usually all scowly on a gargoyle or rooftop looking down… - Ed.] Not helping is the friction from the plastic of the cape and the similar plastic of the head. That’s not really a criticism so much as it is a statement of the facts as they are. Sure, there may have been work arounds (soft goods for example, a ball joint similar to what Hasbro does with their current Marvel Legends), but this really isn’t any sort of deal breaker. The ball jointed shoulders do their job…bicep swivels…but the big win here is double jointed elbows, articulated wrists and removable hands! Your Batman isn’t just stuck punching people (unless he wants to that is…), you can swap out open hands to hold included batarangs and grapple gun! The 3 piece chest articulation, first seen in the 3 ¾” Injustice line, is an interesting choice…and I both love it and hate it. It sucks that it eliminates the waist swivel that has been a standard in action figures for a long time now...but that said, it totally avoids that weird thing where you have the torso going sideways, legs facing front and those protrusions that, if action figures were accurate displays of the human anatomy in real life, would turn every yoga class into a medical emergency! The top tier of this three piece system allows for some turning, the other two parts account for the ab-crunch. This turning is…well…pretty slight…so dynamic poses might be somewhat limited. The ball-jointed hips have an okay range (somewhat interfered with by the pockets from the utility belt) but a thigh swivel is sorely missed. This will prove to be another limiting factor in posing but much like the aforementioned waist swivel, this does allow for a more anatomically correct figure [Uh, are you SURE this is the wording you want to use??? – Ed.]. More than the double jointed elbows, many Bat-Fans (legion and sickening as they are) have been clamoring for a figure with double jointed knees to allow for crouching poses. Well, the good news is that you got those double jointed knees…but I’ll be damned as to how you’re gonna get him to crouch. Boot cuts, pinned and rocker ankles will allow for a good number of stances though…and help to keep the Bat flat-footed and stable.

The sculpt on the figure looks just fine [Except that, you know, it's Batman. - Ed.], as one would expect from DCC. It’s never really been much of a problem for them and that trend continues. Besides, it’s freakin’ Batman. We’re at such Bat-Saturation the hell, I’m convinced I could sculpt a Bat-Figure with my eyes closed. That’s not to diminish the work here…it’s very good…it’s just my usual Bat-Grumbling. Thankfully, plastic quality isn’t an issue here, allowing joints to actually be bent and, so far, with little fear of breakage. I was a little worried about the wrists…but once you work ‘em loose (as they…and the boots… have a shiny gloss as opposed to the flat matte of the remainder of the figure) they’re just fine.

However, I do want to comment on the size. Mattel’s DC figures also claim to be in the 6 inch scale. So, when DC Comics Icons was announced, I know I was certainly hoping to plug these guys in to the extensive Mattel collection that I already have. Thaaaaaaaat’s…not gonna work. Mattel’s stuff stands a full head taller. But…did you ever want to see Batman take on Darth Vader? Then I’ve got news for you! These guys line up great with Hasbro’s 6 inch Star Wars Black Series figures. And before you go thinking Marvel Legends crossover…um…nope. Full head taller there too. Or, at least with the figure I tried it with. Granted, Marvel Legends has some scale issues of its own…so there might be some instances where DC Icons figures fit in…but not something I’d expect as a consistent thing. These do, however, fit in with the SH Figurarts figures from Ban Dai [Actually, during the photoshoot, not so much. - Ed.]. Putting this Batman next to his Injustice counterpart was pretty cool. On the plus side for DC Icons, they’re less expensive and also less likely to poke your eye out or cut you with a cape made out of hard plastic. [Seriously, Ban Dai, are you trying to kill someone??? – Ed.]

All in all, sure, there are some minor niggles here and there, but I like what I’m seeing. It looks like DC Collectibles has thrown down the gauntlet and, with their DC Icons and NECA’s occasional film-based 7 inch scale figures, I really want to start asking “Mattel-who?”. Sure, it’s another DC line that doesn’t really fit in with anyone…but given the quality of the figures and the seemingly leaps and bounds DC Collectibles has improved by…I’m very willing to indulge my completist tendencies on DC Icons and would certainly recommend others to do the same.

Unless they screw up their upcoming Superman. Then…IT’S WAR. Just sayin’.